If you are familiar with Boracay you have most likely seen Ole. A favorite in D’Mall for many years. Well, good news Iloilo! Ole has just opened in Robinson’s Mall. And I mean ‘just’ opened. I happened to the very first customer. Now, when the owner comes out and says you are his very first customer… your first thought might be “oh no, they are using me as a guinea pig”. But not to worry, his chef has been with him for 10 years at the Boracay location. So all is well.  They are on the 3rd floor right next to the newly opened Department of Foreign Affairs.  From the 1st floor by the fountain you can look up and see their sign. 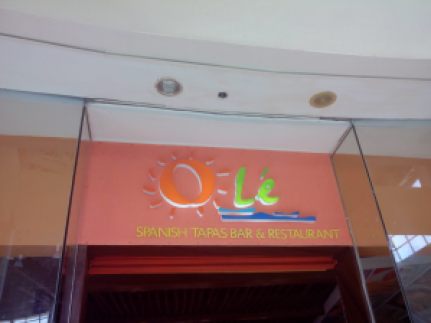 Usually when I drag my wife into a new restaurant she does like a lot of the food. But here we both had some great food. The menu is smaller than in the Boracay location, but the prices are lower too. So it balances out. It is mostly Mexican & Spanish, with some Cuban flair. They have a good assortment of cold & hot tapas, and paella. But I almost tried the chicken fried chicken steak with mashed potatoes.

We started with shrimp gambas. Oh… so good! My wife tried it first and said it was really good. And from the ways her eyes lit up – I knew she really did like it. I tried one and was almost floored by all the flavor. Filipino food is known for being pretty bland. And I guess I have lowered my expectations more than I realized. These were bursting with flavor. Shrimp gambas, are sautéed in olive oil with garlic and chili peppers. Spicy, lots of flavor, but not too much heat. Just perfect.  Oh, also the shrimp gambas comes with some really good garlic bread.  And my wife good a great mango shake. 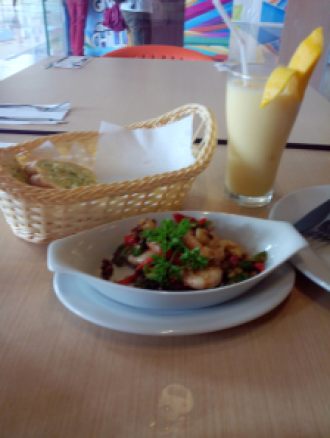 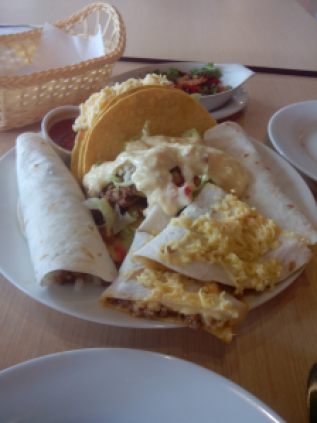 For our entree we split the Mexican platter. A good assortment of things to try. One taco, 2 enchiladas, some nachos, and quesadillas. It was a huge serving. My wife and I split it and still brought some home with us ha ha. You could feed 3 on this easily.   First, the beef was excellent. Most of the beef we get over here is not very good. I would like to know where they buy theirs. The taco was pretty good.   Like I said, good beef, lettuce & tomatoes were nice and fresh. The enchilada was ok – I am used to the Tex-Mex enchilada covered in sauce. And for me it was a little heavy on the onions. But I am not a big fan of onions. So you may like it more. The nachos were good, chips, beef, lettuce and cheese. But the quesadilla was my favorite on the platter! The meat was spiced a bit more than on the other dishes and was really good. It was my wife’s favorite on the platter as well.  And it came with a side of salsa and sour cream!  Both were quite good.

Kyle, the owner, came out to talk after we ate. Since I was his first customer he had to take my picture… you know in the PI’s if no one takes a picture…. it did not happen. I should have shaved…. Anyway, he is very friendly. He was asking a lot about how we liked the food, and what the foreigners here are looking for. I told him the foreigners always are asking about good Mexican and burgers!  And now we have some good Mexican food. He said he could add burgers to the menu if there is enough demand for it. But he was trying to keep it mostly in theme right now.   Of course we agreed that there are not enough foreigners here to keep him open. He will want to keep us happy (I hope) but it is the Ilongos that will make or break him. I should have told Kyle they need some better descriptions on the menu, but I did not think of it until later. My wife had no idea what anything on the menu was. It is just not anything she is familiar with. 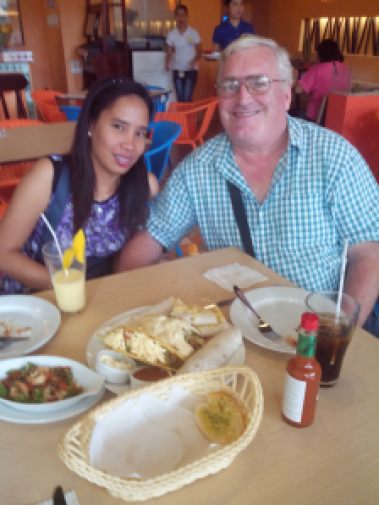 We do have another Mexican restaurant here at SM City. Lava, in the food court. But it is a mall kiosk in the food court. Pretty good food and cheaper, but no ambience. So I do not see them in direct competition, especially since they are in different malls on the other side of town from each other. Mooon Cafe calls itself “Mexican inspired” – but I have yet to find anything close to Mexican on their menu. So I don’t see them as competition at all. Also Mooon is expensive with small portions. Our total at Ole for lunch was just over p700 (about $16 USD). So it seems expensive for Filipino standards. Until you realize we were both stuffed and brought home enough for dinner, for 1. So we could easily feed 3 on that, so not so bad. Fast food for 3 is about p500.  So for a good sit down restaurant it is a fair price.

It compares in price to places like Chika-an or Buto’t-Balot.   They are very Filipino restaurants but quite good & popular – and similarly priced. So I think he is priced right. Wonderful ingredients. And very flavorful food.  And the Filipinos love to order for the table and everyone share – and this perfect for that!  Tapas are, of course, designed for that, but the big platter of entrees work great for sharing with friends and family.

I wish him luck and hope to go back many times.