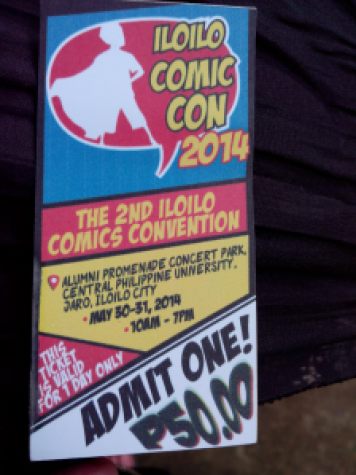 I almost missed the comic con! I had heard nothing about it but a local magic club posted on their Facebook page that they would be attending, and performing, at the con. So I heard about just in time.   The 2012 one was at the local Robisnon’s Mall in the open area by the fountain… a pretty small area. I was not living here yet so I missed it but saw pics. It was a small space but looked pretty crowded. And everyone seemed to be having a good time. They did not hold one in 2013, so this is the 2nd annual convention.   They call it annual… I am ok with that, and even the organizer made fun of himself for calling it annual. But he promised it will be really annual from now on. We shall see Mr. Organizer… we shall see…

I started my day at immigration and was going to have to look for a CPU jeepney. CPU is Central Philippines University – the location of the Comic Con.  Well, as I am walking up to immigration I notice that 75% of the jeepney’s right out front say CPU on them. So this is going to be easier than I thought. When I get on I ask the driver how much to CPU. Base fare is p7.5 (you pay 7, it is like 15 cents, US) and the fare goes up depending on how far you ride. He tells me p7 so I figure it can’t be very far. We ride around for at least 30 minutes! How is this a p7 ride? We zig zag around town, not going in circles but certainly not taking the most direct route. After we get all through Jaro, we turn around and head back into Iloilo, still zig zagging. Eventually we get to CPU. I asked him again if p7 covered the cost and he said yes. I don’t understand – but will not argue.   It felt like at least an hour but was honestly about 30 minutes.

CPU has a nice looking campus. They even have dorms on site. We have tons of colleges around here and this one looks nicer than most I have seen. Nice campus. The convention is in the alumni activity plaza. It is scheduled to start at 10:00 AM and I understand Filipino time so I was planning on being here around 11 or so. But immigration was too fast and efficient (like always) so after immigration, and even the long, winding road to get here, I made it at 10:20. They were not open yet but were selling tickets. Only p50 ($1.25 USD) for the entrance fee. And the first 50 people got a cloth bag with the con logo on it. (yes I got one). At 10:30 they opened the doors. Only 30 minutes late – pretty impressive.

First impression – not a lot of vendors. I am used to American conventions with rooms full of vendor tables. But after looking around I really enjoyed what they did have. There were numerous local artist selling prints and comics. I bought a few comics to read later. I always try and support local artists! In the US I would attend Renaissance Fairs, art shows, craft fairs, anything I could find. I love the local shows. Maybe as this show grows they will get more outside interest and bigger vendors but it is a good local show right now.  And even when the small shows get bigger I prefer if they keep the homey feel of a small show.   The comic book artists were small time, mostly self published comics. It was fun being able to chat with artists, and writers while buying their work. Being a small show has some advantages. These guys can easily get lost in a big corporate convention.

They had a nice stage for events. Quite a few musicians were lined up for the day. Plus a magic show, some trivia contests, and some different cos play competitions. A well rounded schedule of events.   I only heard of one lecture, it was held by “the voice of the Philippines”. Seems kind of their version of Mel Blanc. He voices a lot of stuff over here.   There may have been other lectures but I did not hear of them.

Quite a few of the tables that I thought were vendors at first glance were really displays from collectors. So some really cool stuff to look at – not so much to buy. 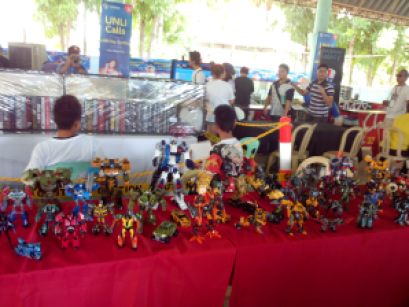 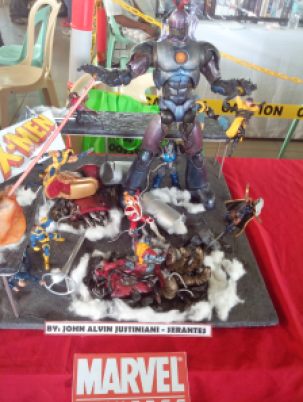 One of the highlights for me was the “American Legacy Pop Culture Food” booth. (kind of a long name isn’t it?) I have seen the signs where they are building one right across from SM Delgado mall. No info on when they are opening, though. So I was looking forward to trying the food, and finding out when they open. I bought a p50 burger. Decent sized bun, great veggies, very small meat patty. But what do you expect for $1.25 at a convention? I have never had cole slaw on a burger before, and I hate cole slaw, but this was one good burger! I talked to the guy running the booth and he said the store by the mall will open on 4JUL14 – I can’t wait. Since I was the only foreigner at the event he asked me what I would recommend for the restaurant. I told him he needs to get mustard. Everyone here puts ketchup and a mayo/ketchup blend on burgers. Sometimes a honey mustard (that taste like a mayo/mustard blend). I told him most Americans like regular yellow mustard. And pulled my mustard bottle out of my bag to show him what I meant. Yes… I have to carry my own with me… I don’t eat a lot of burgers or hot dogs but am prepared just in case I run into one. All grocery stores sell mustard but no restaurant seems to have it. Anyway, great burger. I know a burger should not the most memorable thing at a comic book convention… but it is hard to find a good burger in the Philippines ha ha. When the restaurant opens I will probably try a bunch of their food and write a blog post for it.

Everyone was friendly and seemed to be enjoying themselves. During a movie trivia game there was one funny thing though. Quite a lot of wrong answers were being given – a lot of wild guesses were obvious.   And everyone was cool about it… until they showed a picture of 4 turtles… and asked for all 4 names. This young girl got her hand up quick, and she got up on stage and named Leonardo, Donatello, Michelangelo, and Rafael o. Ok, fine Rafaelo was wrong but I did not realize how funny it would be.   The entire audience and the host started laughing their asses off! People were howling and hollering. You could by the look on her face that as soon as she said it she tried to take it back. But it is hard to unspeak something… So she hangs her head and goes off stage, and the next person got it right of course. To me the reaction was funnier than the wrong answer. 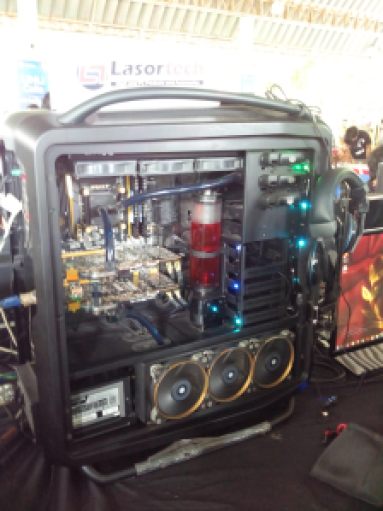 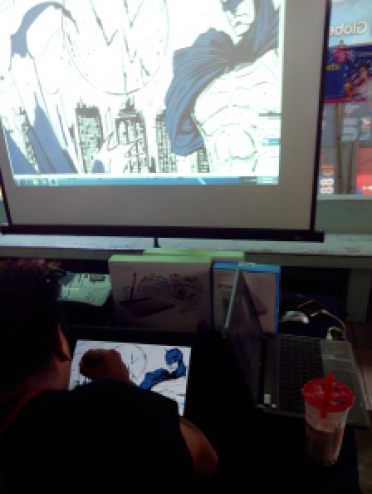 An artist selling drawing tablets, using a projector to demonstrate.