One of my favorite things here is the street food.  But while out shopping around town it is more common to get standard fast food.  In the larger towns many of the well known American chain restaurants are here: Pizza Hut, Wendy’s KFC, McDonald’s, Sbarro’s, even Shakey’s!  Haven’t seen a Taco Bell so far.  But we tend to go for the more local fast food joints.   I am going to discuss some of the more common local fast food chains.  Shakey’s pizza used to be an American chain – but I have not seen one in the US in years.  They are everywhere around here.  It may count as a Filipino restaurant by now.  I ate at one in Cebu back in 2011 but have not eaten at one lately.  The pizza is passable but barely.  But I am not here to discuss them.

The king of fast food joints here has to be Jollibees. 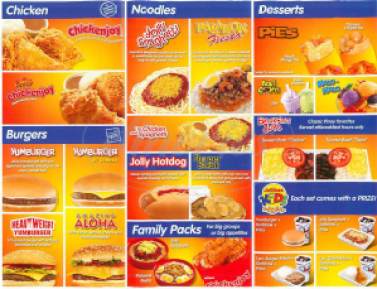 They are the undisputed king here in the Philippines.  Most the food is pretty good, for fast food.  Fried chicken, spaghetti, burgers, ice cream, french fries, rice, hot dogs, and a few more traditional Filipino dishes like tocina and tapa – but, from looking at the trays of food, they don’t seem to be ordered very often. The spaghetti is bit too sweet but that is Filipino spaghetti.  They like it sweet.  The chicken is quite good.  I suppose it is hard to mess up fried chicken too much. The pieces are weird cuts but that is because they use cleavers to chop up chicken and no one has ever heard of a real butcher.  They seem to have gotten it from the Chinese – hack it apart with a cleaver.   And the burgers are ok.  Unfortunately for most Americans they have never heard of mustard around here.  The burgers come with ketchup or mayo, or if you are really unlucky “honey mustard dressing” – a slightly yellow mayo – very gross.  For the price they are quite good.  It usually cost about p100 per person ($2.50USD).  The main problem with them is just that they are Filipino versions of American food.  And they don’t quite get it the same, you know?  But overall an enjoyable meal – if a bit hectic a store.  That is the price of popularity.

Mang Inasal is a bit more Filipino than Jollibees and not quite as popular.  This is one of my favorite places to eat.  For under p100 (about $2.30USD) you get a whole meal.  Generally we get either the breast or thigh. You get a breast/wing or a thigh/drumstick grilled over a fire and unlimited rice.  It comes skewered on a stick so you know it is good!  I have tried a couple other things and not been pleased.  The pork is all fat, the Filipino way.  So I stick with the chicken. The breast/wing is the best for me.  It is lightly seasoned, I have no idea what it is marinated in.  While you are eating the bring around all the rice you can eat.  I usually have 2 scoops.  I joke that in the PI’s you get unli rice and in the US you get unli coke!  I guess both are bad for you in excess.  Pick your poison.  Probably going there for lunch tomorrow.  I have to go to town for the post office anyway… 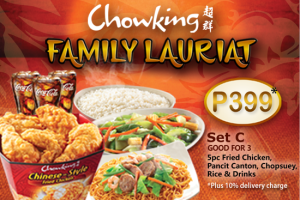 Chow King seems very much like a US mall Chinese restaurant – and for those of you unaware of mall food courts I assure that was not meant as a compliment.   Prices are a little higher – p400 for 3 people instead of p300.  And the food a bit bland.  The best thing here is their chop suey.  Various combos have it as a side dish.  The chicken is really crisp but flavorless, Their bihon (noodles with pork & veggies) is bland and flavorless.  The chop suey is always fresh and crisp.  They seem to be popular for their halo halo.  A traditional Filipino dessert.  Shaved ice with lots of candies, some nuts, and a small scoop of ice cream.  Their halo halo is pretty good but just too damn big!  Well mostly just too much ice for the amount of toppings.  I just don’t stir it and leave at least half the ice in the cup.  But it is good.  I prefer the Mang Inasal halo halo, I think.  I can eat there, but if pork rinds and chop suey are the best dishes…. I would rather spend my money elsewhere. 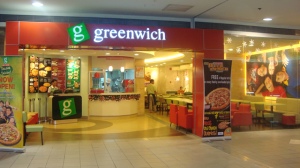 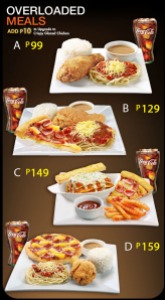 I have been here 5 months and this is a new one for us.  I have been in search of pizza.  It is hard to find good cheese because dairy products are so bad over here.  My Filipino friends said it was really good.  My expat friends said that it is semi edible if nothing else is around.  So with mixed reviews I figured it was time to try it.  Turns out they have fried chicken, pizza, spaghetti, lasagna, french fries, and onion rings (among other things).  I got one of the big combos to try as many things as I could.  One small slice of pizza, 1 piece of fried chicken, a side of spaghetti, and rice.  I gave away my rice first thing because I knew I would not be able to eat it all.  The pizza was actually pretty good for the Philippines.  The crust taste very good but should be cooked a bit longer to crisp it up.  The sauce is just a little too sweet but better than a lot of the delivery chains in the US.  There is so little cheese it is hard to say if it is any good or not.  Overall a pretty good pie for the price.  The chicken is fried chicken, what can you say?  Crisp crust and good flavor.  The spaghetti was very good.  It was much more like Italian spaghetti (they package them at the grocery store as Filipino style or Italian style – Filipino style means sweet).  Not too sweet!  A rich meaty sauce, with some good seasonings.  I did not care at all about the spaghetti when I got there and was pleasantly surprised.  I read about the lasagna and it looks like it is a couple layers of noodles and meat sauce with an alfredo sauce poured on top.  Not exactly what I would call lasagna but probably not too bad.  Next time I will have to try the lasagna and onion rings. They are the first onion rings I have seen over here.  When I said they had onion rings my girlfriend did not know what I meant.  I had to show her the menu and say “the things that look like calamari are onions, not squid.  I think we will be coming back here more.

This is the best pizza I have found in the Philippines.  It is also the most expensive pizza I have found in the Philippines!  Very good crust, nice sauce, and even good cheese!  At the mall they sell it by the slice.  But it is a small slice  for p95 (over $2 USD).  I have had it only once and at that price I will have it only on special occasions.  But it sure was good…. 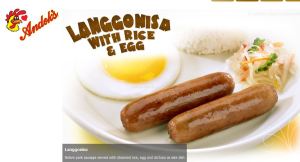 Most Andok’s are pretty small walk up joints with a few tables.  I almost included it in street food but I guess they are more a fast food operation.  They have things other than chicken but all I ever had is the fried chicken and rice.  It is very good chicken and cheap! One piece of chicken with rice is p40 ($1 USD) for p20 you add a coke.  So for p60 ($1.50) you get a good meal.  They also sell beer and Tanduay Ice (think wine cooler – but with rum).  Maybe I will try some other food here but the chicken is so good it may be hard to try anything else.  They seem to do a good business but are never packed like Jollibees, Chow King, or KFC.

KFC?  That is not a Filipino restaurant!  Yes, I know but it is one of the busiest places here.  McDonalds is half empty, Mang Inasal is busier than McD’s but Jollibee, Chow King, and KFC are the kings.  So it has to be included.   But I put it at the end… happy now?  They have the standard original recipe but the only crispy they have is spicy.  I like the crispy non-spicy.  So I really don’t like KFC over here.  Did not really care for it in the US either.  Instead of mashed potatoes they have rice – big surprise.  I have heard that some of them have mashed potatoes but I have not seen any, but the KFC in the US has terrible mashed potatoes so I am not looking very hard for any.  And they give unli gravy for some unknown reason.  A bland brown gravy that these people eat like crazy!  I have not had their spaghetti.  The chicken is mediocre KFC chicken, the fries are good, the rice usually a bit dry.  Every store I have seen is packed.  So I do not think it is worth the trouble to eat here.  But sometimes it happens.

Overall most of the fast food is still better quality than the US fast food. It just doesn’t seem to be as processed as the US food (except the burgers!).  I could, of course, be wrong.  Just my opinion.  Most of the fast food here is chicken or pork, with the ever present spaghetti and bad hamburgers.  I have yet to find a decent burger.  There are some I can eat, if I bring my own mustard, but none worth going out of the way to get. I hear there is a TGI Fridays opening in the city soon.   Never really ate there in the US but may have to give them a try here – just to check out the burger.

We eat at home most of the time but tend to eat out 2 or 3 times a week.  Either fast food or street food.  Considering how much fast food I ate in the States I can see part of the reason I am losing weight!