Day 2 of our Bacolod trip.  (post – http://expatinphilippines.wordpress.com/2013/05/28/bacolod-the-city-of-smiles/)   Time to go to Mambukal.  The web site says there are jeepneys and buses that go out there but does not say which.  Rogena’s cousin says it would be too long to do it.  But first she said there were no buses – until I told her I knew there were. But now she says they would take too long and be p500 ($12) and be un-air conditioned.  She recommends we hire a van for p2,000 ($50).  I don’t care to argue so we get the van.  I really don’t mind the jeepneys, but whatever.  No offense but I would love to take a trip where we did not hook up with family.  They are always expensive.  It takes almost an hour to drive to the resort.  I am trying to keep my expectations kind of low.  The web site makes it look really nice but most of the “resorts” I have seen here leave much to be desired.  We shall see…

As we drive in I can see they spent some money on this joint.  It really is pretty big and the buildings look nice.  Good.  We almost stayed in one of the cabins here – now I kind of wish we did.  I am pleasantly surprised.  We have a pretty busy day planned.  Hike up the mountain to 7 waterfalls (or less), hot sulfur baths, butterfly garden, boating, pool, and maybe a zip line – if I can trick Melane into it.  Let’s get going.

Entrance fee is p50 (little over a buck).  The hike to the falls is free.  We get a guide, after signing a waiver.  It almost doesn’t count as a hike.  They cut steps all the way up the mountain.  Paved it with rocks, and put in hand rails for a lot of it.  But man are there a bunch of steps!  About 10 minutes up to waterfall #1.  Kind of small but nice looking.  Oh, and no swimming in falls 1-3. 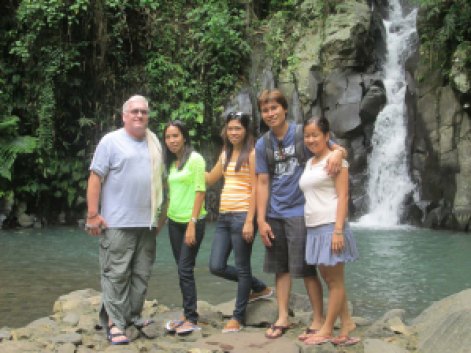 The climb to fall #2 & fall #3 were pretty easy, but everyone is getting a bit winded.  Well not the guide.  Going to #4 we have to stop and rest a couple times.  When we get there he says it is fall #6.  It seems #4 & #5 are broken.  I could not tell if the waterfalls or the access had problems.  I imagine the access.  Anyway #6 is pretty cool.  It has a big fall, a couple smaller ones and nice pools in between.  We swam there for about an hour.  The water was freezing cold but after that climb up here it was welcome.  Some of the local kids were diving from the rocks into one of the larger pools.  They said it was 9 feet deep. (If this is a metric country why don’t they say how many meters?) We also happily bought some overpriced bottles of water.  The guide said it was at least 30 minutes climb up to fall #7.  So we opted to skip it.  The trip down is always so much easier.  Gravity is my friend. 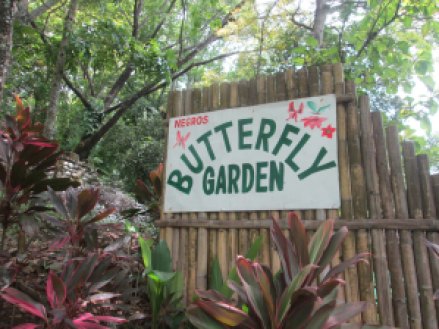 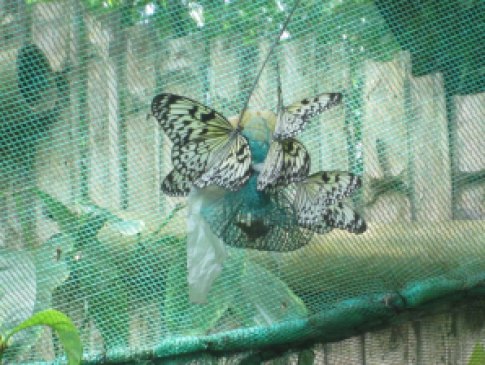 The butterfly garden is only p20 ($.50) to enter.  The entryway has a lot of butterflies on exhibit – pinned to boards.  And an informational video playing.  The garden was very nice.  Lots of butterflies, nice flowers, and a cool fountain.  We did not stay for a long time but it was very pleasant.  Honestly if you have seen one butterfly garden you kind of have seen them all.  But it was nice.  And well worth 50 cents! 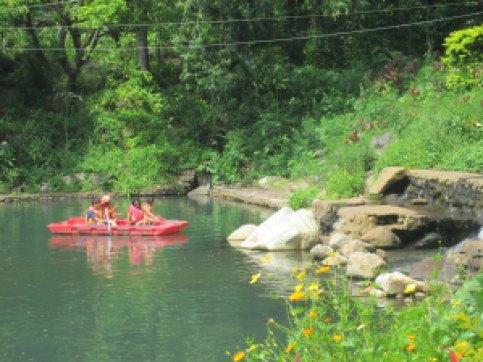 At some point we went to the food court for lunch.  I don’t remember when exactly.  I had a pork chop with rice.  They ordered a pork soup and chicken curry.  The chicken curry was exceptional.  The pork soup tasted like boiled pork with cabbage and green beans… kind like most soup here.  Nothing special but not bad.  My pork chop was excellent!  I don’t know what they marinated it in – most places don’t marinate at all.  Very tasty.  I did have to request a knife because it was a little too tough to cut with my spoon.  It really seems to confuse them when you ask for a knife. They just don’t use them here. And I got a Tanduay Ice (think wine cooler but made with rum) so I am happy.

On to the boating.  I never had any intention of boating but I didn’t tell them that.  So I volunteered to take pictures of them from my shady spot.  I know how hot it is on the water and 30 minutes of rowing feels like forever ha ha.  I was happy to sit this one out.  Nice little lagoon, though.  And the zipline goes over the lagoon so I had some fun watching everyone.  Boating is P30 each?  They said they had a nice time, but that it was very hot out on the water. See, I told you so.

I tried to get Melane to zipline but it just wasn’t happening.  I think she might like it if she tried.  It really is a lot of fun.  They just have one line and it is not too long.  It would be a great first time.  Not happening…

I just thought this was a cool sign.  The fenced off area is so big I couldn’t see any mud.  Boiling or otherwise.  But 90c is freaking hot for mud!  (but yes, boiling is 100c)

We didn’t get boiling mud but they have a nice hot sulfur pool.  I think p50 entrance.  They say “warm” and it is 35c (95f) but it felt much warmer than that.  It reminds me of the baths at King Sauna in Dallas – they are a consistent 106f. But the point is they have what they call the “hot Japanese baths”, which were closed for cleaning.  Warm was great.  I think the hot would have been painful.  The sulfur was not too strong, and the temperature was quite pleasant.  It took a few minutes to coax the girls into the pool, they are not used to much hot water.  Our well water is pretty cold and the sun only warms the tank so much.  But once they got used to it they seemed to like it and we ended up staying in the pool for about an hour.  Melane has had a sore leg for a while and she said this made it feel better.  There are a lot of big fruit bats here and they seem to congregate in the trees by the sulfur pool.  So we got to watch them fly around.  That made it pretty fun too.

We did not get to swim in the regular pool because the girls have denim shorts for swim suits.  The pool specifically says no denim.  I tried to buy bikinis for them last month, but got outvoted.  But we swam in the falls and the sulfur pool so that is ok.

The fruit bats.  There tons of them.  It was kind of cool.

I had a great day!  I would like to come back and spend the night here in one of the cabins sometime.  They have tent camping too but I kind of like the air conditioned room with a shower idea.  If you are in the area I highly recommend this joint.  http://www.mambukalhaven.com/