When I went to the Iloilo Comic Con I wrote about the American Legacy Pop Culture Food booth. (http://expatinphilippines.wordpress.com/2014/06/01/iloilo-comic-con-2014/) They were cooking a small, p50, burger ($1.25 USD). I was talking to the guy running the booth and he said they were going to open on 4JUL14 across the street from SM Delgado, here in the city. I jokingly said ‘oh, the 4th of July… in Filipino time what is that… August 15th?’   How prophetic of me. I have been watching them build their shop – the 4th of July came and went – and they were still working on it. Today is 31JUL14 and they are doing their soft open. Been going on for a week or so, I think. But guess what their official open date is? Yep! You guessed it 15AUG14 ha ha. Maybe I should buy some lotto tickets while I am so lucky on numbers.

My wife and I went today to try it out. They are operating on a partial menu during the soft opening. Working out supply issues, and helping the cooks learn the menu in stages. Pretty normal for a soft open. But the limited menu is a bit…limiting. They have the same p50 burger I got at the Comic Con. It is still p50 and called the “Regular Joe”. I did not get one today, since I already had one, I want to try new things. But it is a good burger for the price. A bit small for a fat American appetite, but quite good. I was hoping to get the “Beefster” but it was not available today. They ran out of steak strips. It is a regular ¼ lb burger with steak strips added.   So since there was no steak strips I got the regular quarter pound burger – the “Uncle Sam”. ¼ lb of beef, coleslaw, tomato, onions, and lettuce.   As I said in the Comic Con post I had not had coleslaw on a burger before, and I am not a slaw fan. But this is good! And the beef was really good.

My wife wanted steak strips with rice, but again, no steak strips today. So she asked for the burger steak with rice. I did not hear why – but it was also not available. She does not like hamburgers so she just ordered French fries and a Coke. (If we ever moved to the US I really don’t know what she would eat!)   I ordered the Uncle Sam burger, potato wedges, and a Coke. So we get to try the regular fries and the wedges. The menu looks pretty good and can’t wait to try the other items after the restaurant opens fully. They have quite a few Add-Ons for the burgers. I was kind of bummed to see that pickles are p10 add-on though. To me pickles are not optional, and almost 25 cents for pickles is a bit steep. Unless it is a whole pickle, I did not think to ask. And in their defense it says “Vlasic” pickle, which is an import brand here. P8 (about 18 cents) for chili is a good price (I will have to try the chili later). Sorry the pics are a little blurry but my Android has a crappy camera; I forgot to bring my good camera. The menu pic is pretty blurry. 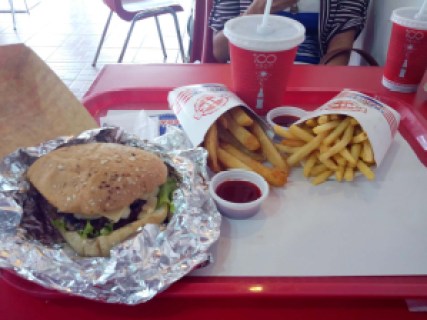 They said it would be 15 minutes for the food, and we got it in about 5 minutes. It all looked very good. And it all tasted very good. The fries were good, but the potato wedges were great! They were not technically wedges, more like what is called “steak fries” in the US. Just a thicker cut fry with the skin still on. And really good. Most burgers here in the PI’s are pretty bad. It is always a Filipino version of an American hamburger. As I am sure the US “Chinese” and “Italian” joints are Americanized versions.  But this burger was pretty much an American burger! Big, juicy, lots of toppings – 3 things you do not generally get on a Filipino burger. Mine was a little pink on the inside. I don’t know if that is standard, or a rushed burger. I will ask next time because I don’t want any pink in my burger. It was not pink enough to send back… but just not quite done. And it was still a really good burger. They said they are still working on a supplier for regular yellow mustard, but I added my own.

Overall I was very happy with the meal. Friendly staff, nice décor. Good food. I can’t wait to try the rest of the menu, and they say they are working on a shake. The prices are good for what you get. A bit high for the Philippines though. The Uncle Sam burger was p112 ($2.60 USD). Not an expensive burger by US standards, just kind of high for the PI’s. But the quality is very good. It looks like a fast food joint but is priced like a restaurant.   But since the food is cooked per order, no pre-cooked, heat lamp food here, it is fairly priced. Most expats ask where to get a real burger, and now I have an answer.   It will not be an everyday stop for me, but for an occasional, almost American, burger it is definitely a winner!