Living in Hawaii we were used to geckos living in the house with us. They were small, quiet and ate bugs. Kind of like kids, before they learn to talk. Not a problem. Right after I got to the Philippines we were sleeping one night and I heard this loud noise. I asked Melane what it was and she said it was a lizard. Of course I told her she was wrong – no lizard is that loud. Well, none that I had heard before. Yes, of course, I was wrong ha ha. The Tuko lizard starts off looking like a regular gecko, but they grow to about 1 foot long and have a loud mating cry. It sounds kind of like “tuuu-kooo tuko-tuko tuuu kooo”. The American GI’s in Vietnam called it the “fuck you lizard”. It kind of sounds like that too…   Here is a recording of it on Google: http://upload.wikimedia.org/wikipedia/commons/9/91/Mating_call_of_a_male_Tokay_gecko_%28Gekko_gecko%29.ogg

At our nipa house we had a couple big ones that lived in the house. One in particular lived behind my desk. He would come out at night and scare the crap out of me. It is kind of too large to move in your peripheral vision, without making you jump out of your skin! I have not seen any at our new apartment yet but do hear them at night. They may be up in the attic. We had no ceilings in the nipa house.

There has been a market for selling them recently. According to internet rumors the tuko was the only thing to survive the blast at Hiroshima. And researchers will pay thousands of dollars for large ones.   It seems that, “they” say, the innards can cure everything from cancer to HIV because of some amazing enzyme. The white meat of the lizard is said to cure many other ailments.   Geckos are reportedly exported to Malaysia, China and South Korea, where they are used as aphrodisiacs and as traditional medicine for asthma, AIDS, cancer, tuberculosis and impotence. Environmental officials have also expressed alarm about the growing trade in the wall-climbing lizards in the Philippines. An 11-ounce (300-gram) gecko reportedly sells for at least p50,000 ($1,160 USD).There has yet to be a single credible medical study on the tuko lizard. But the sale of these lizards all over Asia has made them a threatened species in the Philippines.

All I know for sure is they eat bugs. We are pretty much 85 degrees and 85% humidity – bugs are a constant problem! There is no way I would you a tuko out of my house. I hope he invites some friends over for a party.   That infernal chirping wakes me up some nights, I hope they find the friends they are looking for, we have enough bugs to go around.

But it is not all bad news. They have been featured on stamps. 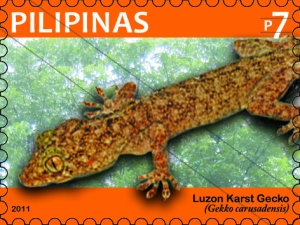 Some have made it into TV. You may have seen this one? 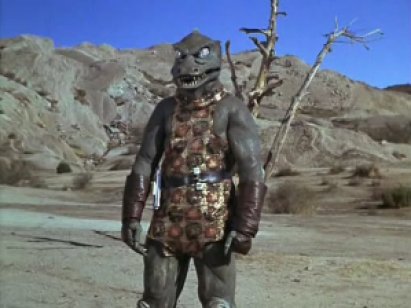 I may have to learn the mating call myself. I have recently found a picture of the female of the species.