“Men are Pigs.”  “You guys are only there for cheap sex.”  These, among other things, are often said by people who have no idea why someone would move 8,000 miles away from home.  And it certainly isn’t “cheap sex” at $1,500 round trip airfare! There are places much closer to home for that.  There is no denying that there is a booming, worldwide, sex tourism business.  Not just Asia but parts of Europe, and South America are also big draws for what has been called “sexpats”.  I, on the other hand, am an expat.  I moved over to the Philippines, got a girlfriend – yes, just one – and live happily with her. I am not even on the right island for the girlie bars.  But I was not looking for a partying retirement.  It is too expensive, and quite frankly too tiring ha ha.   But unfortunately many of us are lumped into one, evil, group by people who know nothing about us or our situation.  They see all of us as sex starved, bitter, old men who could not get a girlfriend back home.  Well there are certainly some of those guys here, but not as many as rumors say there are.  All of the guys I know that live over here are married or in a committed relationship. I get a bit upset when we go to the mall and some older Filipino lady looks at me, my girlfriend, and her cousin with glaring looks.  They stare and you can see the disapproval in their eyes.  Like I am a dirty old man, and my girlfriend & her cousin are my whores.  What we are is a family.  Yes I am 49, my girlfriend is 25, and her cousin is 30, but we are out as a family not a harem.

I try not to let it bother me but sometimes you want to reach out and slap someone (but I know better).  They are judgmental, hate filled people, and not my problem.  Also I don’t want to admit it but there is some reasoning to their prejudice.  Many prejudices are there for a reason! So I try to ignore them, and I’m glad I cannot understand their language so I don’t have to listen to their shit.

Someone posted an interesting video on an expat forum I frequent.  It was not his video but he found it interesting.  I viewed it and thought it was pretty good too and would like to discuss it.  The YouTube video is called: “Western Women on Khao San Road Speak Out About Thailand’s Sex Tourists”.   A woman is interviewing some western women in Thailand.  Most of the statements are what you expect of them, but what surprised me the most was the comment section.  I know… don’t read YouTube comments.  But this only had one troll that I saw and everyone else was having a civil conversation.  Shocking!  I am going to share the video, and links to the original website that posted it.  I will discuss the women’s statements from the video, and will address some of the comments made.  You should watch the 7 minute video real quick, then let’s talk about it.

First, I was impressed that the interviewer, Alison, was careful not to take a stand or lead with inflammatory questions.  During one segment she even commented on the difference between sexpats, and expats.  That is already better treatment than usually expected from one of these videos. 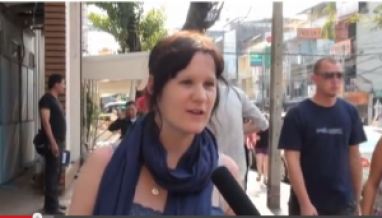 The first woman interviewed tried to use every buzzword she knew.  She even brought up buying an internet bride – which shows how little she knows about the subject.  The guys are all “old, ugly, western guys”.  Which sounds funny coming from an old, ugly, western woman! Oh, sorry, was that rude?  Yes.  Yes it was.  She did make a valid point about white guys being a status symbol, or giving the women more freedom.  She mentioned young Japanese women with old, ugly, western guys. The men are taking advantage of the women.  But if she understood the exchange rates she would know most western guys don’t have as much money as Japanese guys.  That is an expensive country to live in.  So they are not going after the money, like in some countries.  So maybe there is a status thing going on.  Or maybe, just maybe, the women are in love with a western man. It is within the realm of possibility. She also got another segment at the end of the video where she continued her idiocy.  She blames it all on the men because women are subservient and the western men take advantage of that.  Subservient, really? She has obviously never been in a relationship with an Asian woman.  While they do tend to treat their men well, and take good care of them, they certainly do not do anything they don’t want to do.  They are feminine – not slaves.

The 2nd woman made the most sense of them all.  So I am going to skip over her for now. I want to keep on one thought, and the later women fit with the first one.

The 3rd group was 2 women that made the least amount of sense of the lot.  First they said it is wrong for the men to come take advantage of poor Thai women.  Then they said the men did not pay enough once you convert it to their currency.  So does that mean if you pay them more, buying sexual favors is ok?  I am confused.  I cannot say for sure about Thailand but I do know that in the Philippines the bar girls get paid as much in one day as most people make in a week at a “regular” job.  And I think the pay structure is about the same in Thailand. So according to these ladies it must be ok.  They really just seemed concerned about the amount paid? 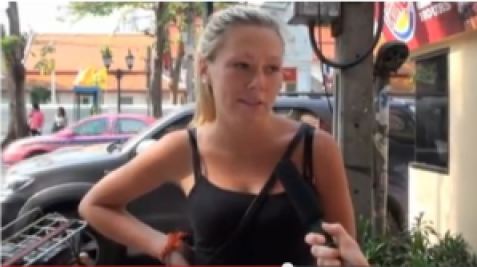 The 4th woman made some sense.  She felt it was kind of sad that men felt the need to come get women that just want them for their money, but even if they were what she called desperate they seemed happy.  I think that raises the question why do the men want to come over here?  Is there something lacking in the relationships with western women?  Or are there really so many  desperate men that just can’t get a woman back home?  She raised some questions but gave no answers or comments other than “desperate but happy”.

The 5th woman interviewed just went on about how much the men and women will miss out on having a real relationship.  But if we are talking about marrying an Asian woman, not just bar hopping, then it makes no sense.  You can have a real relationship over here with a woman just like in any country.  Unless she means you can only have a “real” relationship within your own culture? She said not only the western men, but the Thai women were missing out.  So she is just confused, I think. 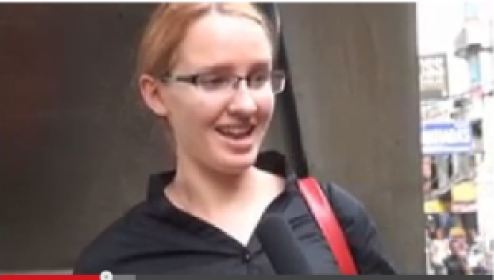 Now back to the 2nd woman interviewed.  She said she started looking and saw a lot differences between Asian and western women.  She said the west pushes for equal rights, manly women, who forgot how to be feminine.  The Asians, she said, are calm and feminine.  The western men seem to prefer the way Asian women behave.  She could have said the same thing in a very negative way – but her choice of words makes her look like a thoughtful, well spoken, woman.  She would probably be ok to date!  (she is too tall and white for my tastes, but you know what I mean).  What she is saying kind of ties in with the 4th & 5th women.  There is something different about the way men and women relate to each other in various countries.

Of course it could be that there is something we like about Asian women – and they like something about western guys. There are a lot of cultural differences.  Reminds me of something a friend at work told me.  He is Mexican and said his mom told him to marry a Mexican woman because she would take good care of him.  And told her daughter to marry an American man because he would take good care of her.  Slightly prejudiced – but some cultural truths in there.

I want to put up some of the comments from the YouTube video.  As I said I know not to read comments over there but sometimes you cannot help it.  And I was surprised most comments were not that bad.  Some were rude – both sides – for and against expats or sexpats. But most comments really were pretty good.  Some of these guys do seem to hold some hostility – but that is common on internet comments isn’t it?

Here is a sample of some of the conversation:

I live in Iloilo where there is virtually no night life.  All the expats I know are either married or living with a steady girlfriend.  So I do see a different side of the story here.  If I lived in Angeles City around all the girlie bars and vacationers I might have a different view.  But I rarely see the sexpats around here.  They would be bored here.

Honestly I came over here because I could quit working at 48 and afford to live here.  If I stayed in the US I would have to work another 20 years at least, and my health is already failing.  I am walking distance to a beach and a short bus ride to the mountains. The fact that the women over here are amazing and know how to treat a man is just gravy.